Foot in IIM but heart on dust bowl uplift-NIRMAL KUMAR

At the tender age of three years, polio arrested his body growth but not his dream. His Bihar village didn’t have a high school, but polio-afflicted Nirmal Kumar’s CV would still be stunning.

At 26, Nirmal Kumar, a Post-Graduate Programme in Management student of Indian Institute of Management-Ahmedabad, is a great example of grit and resolute character. 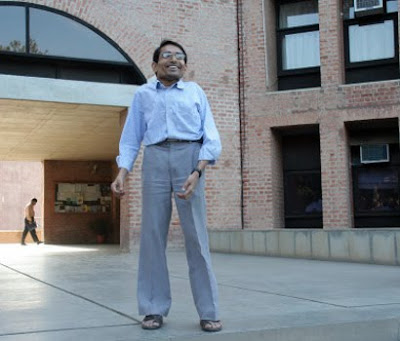 Kumar belongs to a remote village Risuara in Siwan district of Bihar. After clearing CAT in the first attempt and entering the impressive Louis Kahn plaza of IIM-A, which he had never heard of during his college days, was a dream come true. He was teaching at a private institute in Hyderabad when he learnt that some of his friends were preparing for CAT. The possibility of becoming an entrepreneur excited him, and he realised a degree from the top B-school would stand him in good stead.


“Everything was dormant in me. Attending classes at the IIM-A has given me tremendous exposure, confidence and a lot of networking capabilities,” says Nirmal.

"Vision 2020", written in bold red in his dorm room looks quite like a target Nirmal set for himself. "I aspire to become a rural king, owner of India's most respected organisation," he says.

Determined not to take any million dollar job offers, Nirmal has decided to become a rural entrepreneur and go back to his roots.

"I have seen people in rural areas deprived of basic needs of education, health and entertainment. My idea is to develop a one point source for all these facilities at realistic prices. I want to take the advanced technology revolution to their doorsteps and address their problems," he says.

For this, he set up a business venture Community Information and Communication Centre (CICI), a one point service provider on healthcare, education and entertainment.


Its pilot project will be in Chhapra, Siwan, and Gopalganj before he takes it to all the BIMARU states. This venture will be at the grassroots level, be financially self-sustainable and can be replicated.

"Rural market needs have huge business potential which I want to explore", says Nirmal. So far, Nirmal has given over 30 presentations to IAS officers, financial institutes, banks and venture capitalists.

His main supporter has been Prof P K Sinha from IIM-A. Kumar got rave views for his novel idea from Bihar Chief Minister Nitish Kumar, who held a closed room interaction with students of Bihar during his visit to IIM-A last year.

"My physical disability has never come in between my aim and my approach towards life," says Kumar.

Like many at the Indian Institute of Management Ahmedabad (IIM-A), the 26-year-old doesn’t aspire to a Wall Street job. However, his eyes flash with the big dream he’s nurturing.Having made the leap from a Siwan backwater, Nirmal wants to return to his roots, but with an idea that he believes could change the lives of people in Bihar.

A budding entrepreneur, he wants to use advanced technology to create a one-stop provider of basic facilities. The building blocks of his venture — Community Information and Communication Centre — will be in place by September. Over time, the centre will offer health care, education and entertainment in villages.

Nirmal, in the first year of his MBA course after having cleared the gruelling CAT last year, has made up his mind to opt out of placements, due in the spring of 2008.

Showing the precision of a corporate strategist, the diminutive student predicts an annual turnover of over Rs 2,000 crore for his centre in 13 years. His aim is to be a globally recognised figure in rural development. That ambition has been emblazoned in red on a chart in his hostel.

“I am going to set up a profit-making company that will work in the rural areas. The pilot projects will begin in Chhapra, Siwan and Gopalganj before the experiment is repeated in all Bimaru states,” said Nirmal.

Nitish Kumar would be delighted to have him. During his visit to the campus last year, the Bihar chief minister was impressed with presentations made by students on ways to bring about social change in rural Bihar.

Offers for financial assistance to set up the Rs 5-crore centre have already started flowing from overseas financiers. Nirmal has made presentations on his plan to over two dozen IAS officers, banks and venture capitalists. Three professors, including one from IIT, are helping him take his idea from the drawing board to the dust bowls.

“The profit that I will make will be ploughed back,” says the son of a school teacher, who hadn’t heard about IIM until he graduated.