A recipient of Padma Vibhushan, Binod Bihari Mukherjee was an artist with diverse interests. He was perhaps the most informed Indian artist of his generation. Besides writing on history of art education he also wrote a series of incisive studies, which were posthumously collected and then published as a book.

Blind : Due to an early childhood illness. 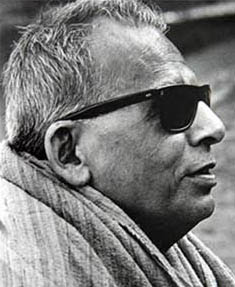 A recipient of Padma Vibhushan, Binod Bihari Mukherjee was an artist with diverse interests. His creativity was so intense that it found its way of expression not only in form of paintings but he also murals and sculptures.
Born in a highly literate family, Binod was unable to pursue a systematic form of schooling when an early childhood illness affected his vision. However, his own interest and talent for art and literature was soon recognized and he spent most of his former years of learning at Shanti Niketan, a world-renowned university for art and literature.


Binod's style of work was simple and ideological. In his work, he renounced overt symbolism of mythological descriptions. Instead he turned to simple representations of his immediate surroundings.
Binod's perception of the landscape of Shanti Niketan and the life within the campus has been very artistically represented by him in the form of compositional calligraphic paintings. His expression through his drawings and sketches, are full of life. Soon, he diversified his form of expression to mural paintings. Murals, he felt were more intricate and descriptive, inspiring him to present his vision of the world more comprehensively.

The first of his more significant murals is the representation of the local landscape he painted on the ceiling of the hostel dormitory of Shanti Niketan in the year 1940. In this mural he gathers his experience of the local villages in a continuous web of intricate images and unfolds it around the central pond to the four corners of the ceiling, constantly shifting the perspective and focus of the viewer.


Binod travelled widely to capture the various forms of nature into his work. He accepted the position of a Curator at the Nepal Government museum in Kathmandu. During his short stay in Nepal, he understood and captured Nepal's rich art and craft heritage in a series of drawings and watercolours, adding a new dimension to his work.

On his return from Nepal, in 1952, Binod settled down in Mussouri, at the foot hills of the Himalayas. Landscape once again became his major subject. This time capturing the more transient aspects of nature, by painting the mountains engulfed in the heavenly mist.

All these years, Binod had been gradually loss of eyesight. He became completely blind by the time he was 50. But, this, in no way diminished his creative urge. Directing himself into new areas and drawing upon his inner resources he started making drawings and small sculptures, based upon figural images he made by folding papers.

Binod was perhaps the most informed Indian artist of his generation. While teaching courses in Indian art history at Shanti Niketan, he shared his deep interest in the subject with his students. Binod took to writing seriously after losing his eyesight, using it as a tool not only to express his personal views on art but also to give literary expression to his experience. Besides writing on history of art education he also wrote a series of incisive studies, which were posthumously collected and then published as a book.

Binod preferred to work in a self imposed seclusion but his great artwork and his literary contribution to the world could not go unnoticed. In the year 1973, Satyajit Ray a well-known film director made an exclusive documentary on his work and called it 'Inner Eye'. Binod was also awarded the Honorary Doctorate degree by Vishva Bharti in 1977. What brought Binod definitive recognition as a modern writer in Bengali was the collection of his autobiographical pieces called Chitrakor. This describes his aesthetic sense through his vision of art. Here, he also outlines the context of his early life, his experience of blindness and his attempts to come to terms with it. Chitrakor, won Binod two literary awards - the Rabindra puraskar and the Bhartiya Bhasha Parishad Award in the year 1980.


Binod Bihari died at the age of 76, leaving behind a legend of modern Asian Art. This was the time when his influence on Indian art scene was at its peak, and connoisseurs across the world had started taking greater notice of his works. Binod's visual impairment followed by complete loss of eyesight was never a problem for him. He was always able to bring out his creative and literary skills for which he is remembered even today.