Sminu Jindal, -What makes a person special is her work, her compassion and not her condition.” 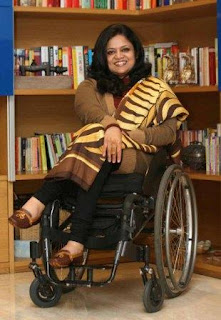 You might be excused if you gape at Sminu Jindal. She is quite used to it. Busy shuffling around in her wheelchair as she goes about her office work, it takes a while to realise that she is paralyzed waist downwards. She makes multitasking on a wheelchair look so simple. “But it is not. And that is why I have been trying to create awareness among people in the government and corporate houses to make their respective infrastructure accessible to all, especially the elderly, women in confinement/ with infants and reduced mobility people,” says Sminu, MD, Jindal Saw Ltd.

In spite of being confined to the wheelchair due to an accident at the age of 11, she has not allowed her spirit to be chained.. On the contrary, it has added wheels to her determination to take life head on. And she doesn’t have just herself in mind.

Her organisation ‘Svayam’ (an initiative of S J Charitable Trust) has been working closely with NDMC, ASI, DTC and the Education Ministry of Delhi to make public conveniences units, historical monuments like the Qutub Minar and Jalianwala Bagh, bus queue shelters and government schools accessible to all those with reduced mobility.

“Government agencies are empathetic towards such demands when told about them, but they don’t know how to go about it and that’s where our initiative comes in. We help in identifying and drawing out a plan for a project that needs to give attention where it is due.”

It is easy to get impressed by her, since Sminu Jindal is an exceptional and exemplary woman of substance who does not shy away from challenges in all walks of life. She has been working incessantly towards providing independence and dignity to people with reduced mobility through ‘Svayam’. “I believe that we should make the environment enabled for the disabled,” says Sminu.

It might be her driving force, but that’s not the only thing that Sminu Jindal is all about. She is the first lady entrant in the country to do her gender proud by breaking the glass ceiling in the steel, oil and gas sector in India. Having been appointed as the Managing Director of Jindal SAW Ltd, a part of the fourth largest industrial house in India, the Jindal Group, Sminu’s contribution to the growth of the organization has been phenomenal.

“I had decided at the tender age of seven that I would like to join my father’s business. My parents used to laugh, thinking it was a passing phase. they’d say that before I knew it, I’d be married off. I was able-bodied at that time.”

It was while she was returning to Delhi from her school, Maharani Gayatri Devi Girls’ School in Jaipur, that her car met with a terrible accident in which she lost movement of her lower body. “It took me a long time to realise what had happened to me, but my parents stood rock solid in helping me cope with the repercussions of the accident.

They never treated me differently from my sisters. My two younger sisters were also very sweet. When we would fight, I would call out to them to come and get thrashed by me and they would come! So it was a very normal upbringing for me where

I was never given any special consideration, be it organizing my cupboard or getting stuff from the kitchen. What is great is that once my parents accepted my condition, they educated themselves about it and found out the best possible treatments that would help me grow up the normal way.

They got me a machine that would make me stand up for a few hours everyday, so that I would be able to grow proportionately. I was at a growing age when the accident happened, and being confined to a wheelchair could have hampered the normal growth of my legs.”

And all this does not come out of quivering lips. Sminu is jovial and jests all along. She talks about her condition in the most matter-of-fact way. There is no hesitation or reluctance. She has no problem in accepting her condition, and neither has her husband, Indresh Batra, found it an issue.

They met at a friend’s party where the two got along over “nonsensical banter”. After which one thing led to another and they got married. They have two sons aged six and three. Incidentally, Sminu had a natural conception, after which she went to the US where experts tracked her pregnancy.

“We have a normal family life. Just like my parents, my husband too doesn’t give me any special treatment. We fight like every other husband and wife and indulge our children like other parents.”

Her message is simple: “What makes a person special is her work, her compassion and not her condition.”

Sminu Jindal is an exceptional and exemplary woman of substance who does not shy away from challenges in all walks of life. She has been working incessantly towards promoting independence and dignity to people with reduced mobility through Svayam (an initiative of S.J. Charitable Trust).

Through Svayam, she has been involved in helping various government agencies and corporate houses make their respective infrastructure accessible to all especially the elderly, women in confinement/with infants, children and people with reduced mobility. 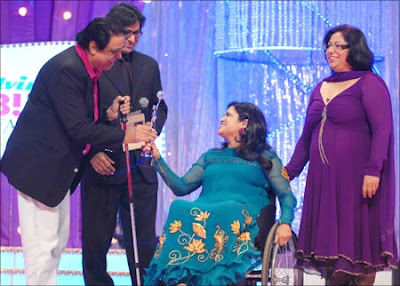 Ms. Jindal has not only highlighted the trials and tribulation of the reduced mobility populace on the home turf but taken it to various international forums like Transed at Montreal 2007, Active participation in workshop conducted by Asia Pacific Development Centre on Disability (APCD) Bangkok, Thailand in December, 2007 on Non Handicapping Environment, a paper on "Accessible Public Infrastructure-The Only Way Forward" was presented by Svayam in the 3rd General Assembly and Conference organized by National Forum of Organizations Working with the Disabled (NFOWD) and Asia & Pacific Disability Forum (APDF) held in Dhaka, Bangladesh in Feb 2008

Svayam hosted a national consultation meeting on simplifying the procedure of issuing Disability Certificate. Sminu Jindal took up the cause of inclusive air travel very strongly and successfully advocated inclusion of pro-disabled provisions in Civil Aviation Requirements for Carriage by Air of People with Disability and Reduced Mobility with the Director General of Civil Aviation.

Ms. Jindal has been appointed as Chairperson of ARUNIM (Association for Rehabilitation under National Trust Initiative of Marketing) and has also been nominated as member of the Governing Council of National Institute of Physically Handicapped by Ministry of Social Justice and Empowerment, Government of India.

Next on her agenda is to sensitize tourism in India - to help people with reduced mobility enjoy the splendour of our country. Way to go, Sminu!