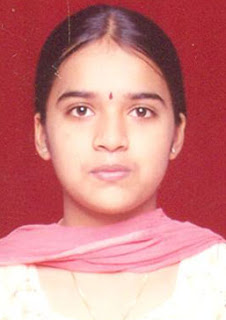 In her external appearance, Samagna is an ordinary, simple and homely child. But, this 18 year old II Year Medical Student from Osmania Medical College, is no ordinary child. According to her mother Uma Shankar, “Samagna is a gifted child”. She is a wonderful combination of intelligence, humility and affection. She respects elders. She sings very well. She knows how to adjust with others in the joint family”. In the words of her mother, “I don’t think we will ever find a child like this. I am a proud mother”.


Samagna was the “Best outgoing Student” from Johnson Grammar School. She got the highest marks in Telugu in X Class, and secured 348th rank in EAMCET. Samagna would constantly talk about “Ethics in Medicine”, and advise everyone in the family that we have to be ethical and be contended with what we have in life.


On Tuesday, 14th September, Samagna complained of severe headache and later had vomittings. Despite a series of medical consultations and medication, she did not recover. Finally, on the advise of her doctor cousin, Mrs. Uma Shankar rushed Samagna to Kamineni Hospital, where she was put on ventilator. Unfortunately, Samagna never recovered and was declared “Brain Dead” on 17th September. At that moment, Samagna’s brother who is in junior college said, “We should donate akka’s organs, we should not let her organs go to ashes. She was very keen to do it”.

Mrs. Uma Shankar recollects that Samagna couple of months ago wanted everyone in the family including herself to pledge for organ donation. When Mrs. Shankar raised a doubt that perhaps these organizations may be selling organs, Samagna snapped back and said, “mummy, don’t say anything without checking about them, they are doing very good service by giving life to so many people.” Apparently she quoted young children’s organs being donated recently.

When approached by MOHAN Foundation’s CEO, Mr. K. Raghuram to donate her organs, Samagna’s parents consented to donate her organs and wanted her to live on in as many people as possible. Her kidneys, liver, heart valves and eyes were retrieved on the night of 17th and transplanted for deserving patients at Kamineni Hospitals, Global Hospitals, Star Hospitals and L.V. Prasad Eye Institute respectively.

Samagna’s mother says “my daughter has saved seven lives without becoming a doctor itself, I am truly proud of her”.