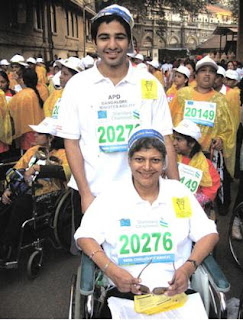 Pushing his great aunt along in the recent Wheelchair Marathon in Mumbai, NISHADH REGO records his impressions of the most special race of them all


W e arrived at 7.00 a.m. to take our place among the 300- odd participants of the 2011 Mumbai Wheelchair Marathon (January 15). A gully between the Times of India and BMC buildings served as our holding area; a small space for a side event on a day dominated by the usual suspects; the Standard Chartereds, the Shilpa Shettys, and CEOs.

I noticed a woman in a wheelchair beside me. She looked middle-aged, but her face bore a tired spent look. Nevertheless, she was there pushed by her husband and accompanied by banner bearers. The banner said she was a long-term spinal cancer patient (and hence paraplegic) who had started a school for young paraplegic girls. What the banner did not say was that she was also a doctor.

It struck me, as I stood in the holding area, that this was no race, no Sunday stroll in the park, no hobby, no publicity stunt or tokenistic commitment to a big name corporate. These were arthritis and cancer patients, paraplegics, and polio victims who had come from far and wide on a genuine mission to spread their message; best exemplified by Jacqueline Colaco, my admirable arthritic grand-aunt, taking part in her fourth marathon. It was her wheelchair I was pushing. She had come all the way from Bangalore to raise awareness for people with disabilities. At 61, and in incredible pain, she braved the difficulties of air travel and the pace and chaos of Mumbai to participate.

The buzz among the participants; a genuine sense of excitement... cameras clicked, wheelchairs clanked, and people of every conceivable age and accent chatted, eagerly anticipating the start of this important occasion. Most ‘runners' came in groups, decked out in colourful, conspicuous uniforms, many with slogans and banners. What is more, there was a beautiful sense of solidarity among them as they exchanged greetings, pamphlets and e-mails. I felt somewhat disconnected and empathetic at the same time. I couldn't really share this solidarity because I hadn't experienced their pain and suffering, but I felt like I was beginning to understand the commitment, and dedication of my fellow participants in the face of all adversity. Yes, they were in wheelchairs or used walking sticks but were people just like me and they deserved more attention, respect and support than they got.

The race itself was a surreal experience. I never imagined my first marathon being in the wheelchair category. It was inspiring to see the entire field take to the track with such zest and enthusiasm. I felt happy that Jackie seemed to enjoy herself taking photos at landmark locations from her old life in Mumbai while handing out flyers and pamphlets promoting The Association of People with Disability (APD), Bangalore, and telling her story. Participating alongside the senior citizens was also a welcome experience. It made me think of my parents who are not senior citizens but are notoriously inactive when it comes to exercise and physical wellbeing.

That said, the whole experience was much too short. We were much too sidelined to make/have any real impact on the day's proceedings, neither the media nor the crowd noticed us. I felt as though we were the time-fillers, the 30-minute opening local act, forgotten by most the moment the main performer comes on stage. The Standard Chartered cheering squad (employees/volunteers assigned by SC to cheer at strategic points in the race) was vocal and gave us momentary superficial satisfaction but the fact that SC needed to have an assigned cheer squad for the wheelchair spoke volumes.

Our race happened to coincide with the end of all of the other races and, in sharing routes, we were shoved to one side of the road by our suddenly dutiful traffic police contingent and some self-important, aggressive runners. The end of the race saw us ‘marched off' back to our little gully and it was over.

I have to thank my grand aunt for asking me to push her along because I would never have had this experience. I might have been running in the main event, worrying about my water intake or my left ankle, my timing and medal, immune to everything around me. I might have been a husband or brother coming to support my spouse or sibling, or a celebrity making a fleeting appearance for publicity. Thankfully, I was a participant in the most special race of them all, a temporary insider looking out at the sympathetic, but distant, world. This is what it took for me to start thinking, “I, Nishadh Rego, could be in my own wheelchair some day, any day. How about that?”

Nishadh is a post-graduate student in Canberra, Australia