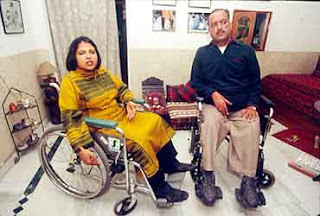 It’s often believed that philanthropy is the prerogative of those to whom life has dealt a good hand. They are grateful and feel the need to give back to the less fortunate. Anjalee Aggarwal is the founder and national coordinator, and Sanjeev Sachdeva the programme coordinator of a unique organisation: 'Samarthya’. Both suffer from muscular dystrophy (a genetic progressive irreversible disability), but this has not prevented them from bringing meaning and cheer to the lives of many. Anjlee Agarwal and Sanjeev Sachdeva, both persons with muscular dystrophy, a muscle disease that causes muscle weakness are pioneers in barrier-free tourism in India. Muscular dystrophies are characterized by progressive skeletal muscle weakness, defects in muscle proteins, and the death of muscle cells and tissue. Both are assisted wheelchair users and have been at the forefront of advocacy campaigns on the need to make public places accessible. Versatile and always bubbling with creative ideas, both firmly believe that persons with disability have a right to live with dignity and grace.


Anjlee and Sanjeev have the distinction of conducting workshops on accessibility and barrier-free tourism both in India and abroad. “Barrier-free tourism can go a long way in integrating Persons with Disability in the mainstream society,” they assert. They point out that travel tours for persons with disabilities can be actually act as therapy for them. “When one goes to an unknown place, historical or inaccessible, one learns more. Through such exposure persons with disability develop a sense of confidence and a determination to fight against all odds,” the positive- spirited Anjlee and Sanjeev spells out their mantra. Besides such trips help create awareness on disability in all the places we go, they point out. Both have been the inspiration behind Samarthya which has been playing a pivotal role in advocating the vision of Anjlee and Sanjeev for a barrier-free world. Working for the past more than five years, Samarthya’s prime goal is to promote “Inclusive Society and Universal Design in the Built Environment and Transportation”.

"Every person with disability has the right to move out independently with minimum assistance and live life with dignity and grace. And it is our firm conviction that barrier-free tourism for disabled people can play an important role in integrating them into the mainstream of society..." So reads the leaflet describing Samarthya's goals. Samarthya for the past several years have been able to develop modules on accessibility and have been conducting accessibility audits in several historical and public places.

Set up in 1996, the 150 member strong Samarthya has been trying to make the world easier to navigate and more manageable for the differently abled. "About 50 million people in India suffer from some kind of disability and they don't get equal opportunities. The urban lot still has some awareness of their rights. People in villages are very badly off. The problems of infrastructure, transportation and accessibility are key to the issue,” says Aggarwal. Aggarwal and Sachdeva don't wallow in self-pity and bemoan the frustrations they've encountered in this journey. They prefer to see them as “challenges”. When approaching government agencies, corporate houses or individuals with their proposals they don’t go expecting any favours because they are handicapped. Background research is comprehensively done, the home work in place. They have been fortunate enough to get exposure to access facilities offered to the disabled in the developed world; they’ve also attended workshops there. Now the aim is to generate that level of awareness in India. Sachdeva adds, “In terms of tourist travel, so far we have been restricted to places closer home in the North. We want to organise travel tours that take disabled people to different corners of this great nation.”

Samarthya also organises awareness-cum-excursion tours for the disabled to historical, religious and tourist places. Their itinerary has included places like Chandigarh, Haridwar, Mussoorie, Mathura, Agra, Bharatpur, Shimla and even the Vaishno Devi shrine. "We are not travel operators," Sachdeva asserts. "Our purpose is to instill faith in the disabled. These trips widen their horizons and make them more confident of facing the world." "We want to promote barrier-free tourism' along with accessible transportation' accommodation and public services'" explains Agarwal. Their natural predilection for travel slowly evolved into a project to render public service. "You can design your house according to your convenience' but mobility is a test of will power and strength'" says Sachdeva. In 1994' the two went on a holiday to Shimla with two other friends'one suffered from polio and the other was vision-impaired. "Despite the lack of accessibility features' we had a great time. It was an empowering experience'" he recalls. The idea for Samarthya' which loosely translates to 'capability'' was thus born.

Agarwal and Sachdeva' who call themselves 'half-architects'' now offer consultation and advice on how to make tourist sites' public buildings and transport system disabled-friendly. In the 2-km radius of their West Delhi office' they have managed to make all schools' banks' public conveniences and bus stops barrier-free.

Their first major project was Dilli Haat' the capital's crafts and food bazaar' which they successfully made accessible in March 2003. After a three-month survey' the two concluded that lowering the ticket counter's height' smoothening the cobbled floor and constructing 27 ramps in the area would facilitate mobility for the wheelchair-bound. "Our effort is to make public spaces accessible to all' not just the disabled. Even women in high heels will find a smooth floor easier to navigate'" says Sachdeva. These changes were made at a cost of Rs 10 lakh' with funding from both the Delhi and Union governments. They hope it'll set a precedent for other tourist spots in the country. "In fact' when Mumbai started building a bazaar on the lines of Dilli Haat' they contacted us for advice'" says Agarwal.

The Samarthya duo received their training at a UN workshop on tourism for people with disabilities in 2000. Currently' they are working with the Delhi Metro Rail Corporation (DMRC). Another project to build disabled-friendly buses for the Delhi Transport Corporation is currently on. Samarthya is also involved in providing counselling' employment and education for the disabled. The NGO has so far conducted 25 access audits across the country to determine how buildings can be redesigned' without altering the aesthetic and structural aspects. "There is a lot of work for us now'" he laughs.

The lives of the two prime forces behind this organisation are cases of exemplary will power and determination. Muscular dystrophy afflicted Sachdeva at the age of 23 and made him an invalid. For some years he underwent severe depression. However, gradually with the support of friends and family he battled his demons, faced his fears. He went on to do an MPhil in political science and now works as a research assistant in a government agency, apart from managing Samarthya. Aggarwal partners him in this mission. She is also devoted to her work with tribals and sells their products from her boutique in Delhi. Anjalee says,“Many years back when my disability became obvious I got a lot of sympathy, even pity from my friends. But now when they see me they admit I have achieved much more than them. `We are just sitting at home watching saas-bahu soaps, while you have chartered a different path’ they say.” Mr. Sachdeva played a helping hand in improving the conditions of people suffering from muscular dystrophy and by doing this had become a support for the community. Presently a joint member of Lok sabha he started his work from a Non- governmental organisation (N.G.O) Samarthya later establishing his own NGO named Sanjeevani India.Working in this field from 1966 Mr. Sachdeva had overcome his muscular dystrophy and is known for his expertise which resulted in presenting papers on accessibility in countries like Bali, Indonesia, Bangkok, Japan, Sri Lanka, Hong Kong and Canada.Mr.Sachdeva co-authored numerous action oriented research studies on Indian railways, road safety, buses and bus shelters. He also contributed in making of Dilli haat , low floor buses and Delhi metro barrier free by providing easy accessibility for affected.In recognising his efforts and contributions he has been awarded with ACHARYA VINOBHA BHAVE NATIONAL AWARD 2001, NATIONAL AWARD 2002,RED AND WHITE BRAVERY GOLD AWARD 2005, CAVIN KARE ABILITY MASTERY AWARD 2005 and KARAM VEER AWARD 2008 For a person who loves making friends and keen interest in travelling, the problems faced by people affected from muscular dystrophy moved him to fight for them. Accepting reality and overcoming the bitter part of his life no wonder people get surprised to see him singing melodious as always music provides the necessary strength to fight and stay calm in distress. Winners of several awards, Anjlee and Sanjeev are an epitome of courage and determination. They have shown the world that nothing is impossible for the socio-medically disadvantaged and they are capable of doing which many general persons cannot even dream of.

For more about the work of Anjlee and Sanjeev, log on to http://www.samarthyam.org/Words that remind one of that famous couplet by Iqbal:

(There are worlds to be discovered beyond this constellation,

There are tests of love and perseverance yet to come)

Their office is located at: