Samuel Mani has dreamt big and made it !!!!! 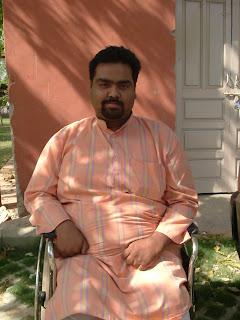 People with reduced mobility as successful entrepreneurs!!! It’s not impossible anymore, with their grit and determination they too can realize their dreams and aspirations. Such is the success story of Samuel Mani who despite being on a wheelchair is now successfully running and managing his own firm called ‘Neutron Computers’. He is not only financially independent but also employs around six people in his firm, thereby offering employment opportunities to others too.

There were certain complications during birth which left Mani with a disabling condition called cerebral palsy. Mani uses a wheelchair for his mobility. He did his initial schooling from The Spastic Society of Northern India (now called as Action for Ability Development and Inclusion) at Hauzkhas, New Delhi. With proactive support from special educators, developmental therapists and rehabilitators, Mani cleared his 10th exams and completed his 12th standard from St. Mary’s School. He went on to acquire his graduation degree in commerce from Delhi University. But that did not land him in a job.

He spent two years looking for a suitable job but the societal attitudes about disability & inaccessible environments did not allow him to find one. Failure to secure a job gave birth to the idea of starting something of his own. He undertook a software and hardware course in computers and then founded his own computer hardware and software firm, “Neutron Computers”.

With initial hiccups and teething problems, his firm Neutron Computers gradually began making dent. For he went beyond the call of duty and provided value addition to his work which included maintenance of PCs, servers, mainframes and laptops and software & hardware solutions and Annual Maintenance Contracts. Due to sincere efforts, hard work and credibility, Neutron computers was soon looking after the hardware and software needs of prestigious organizations likes Cauvery Water Dispute Tribunal (A ministry of Water Resources Undertaking), Rehabilitation Council of India, Evangelical Fellowship of India, Bible Society of India, Business and Communication Foundation, Avana India, A.A.D.I. to name a few.

Recently Samuel Mani has been appointed as a Microsoft Authorized Refurbisher, the first one to do so in India. The concept of MAR is to promote responsible business practices and social responsibility amongst the Corporate Sector in India and has been initiated under JEEVIKA Project jointly launched by AADI and FICCI (SEDF) and is expected to achieve following multi-fold objectives:

• Skill enhancement and placement services for Persons with Disabilities.

Under this agreement, Samuel Mani has been refurbishing used computers with free of cost software provided by Microsoft. Microsoft, as part of it’s global philanthropy campaign is partnering with FICCI (SEDF) to put in place a supply chain for used computers, which are being refurbished by the appointed MAR. These computers in turn are being sold to NGO’s and educational institutions at a discounted price.

This is an excellent model that offers a win-win opportunity for all including the donors of the old computers, the MAR, the recipient non-profits, Microsoft and the facilitator, FICCI-SEDF, in the whole process. However, there is a need of more and more Corporate Houses coming forward to donate their old/obsolete computers and not throw them in junk. It will provide affordable access to technology and livelihood opportunity to several disadvantaged groups in the society.