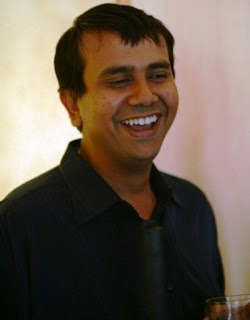 Ashish Goyal, an employee at J P Morgan's London office, has been selected for India's National Award for the Empowerment of Persons with Disabilities, this year.


Ashish is the first blind trader to work for a bank and is also the first-ever blind MBA student at The Wharton School in the United States.

Ashish works for J P Morgan's chief investment office and is passionate about macroeconomics and the financial markets.

He has been feted by his colleagues for 'thriving in a very high pressure environment in these extremely difficult market conditions.'


Outside his official assignment, Ashish represented the Metro London Sports Club in 2009 in the United Kingdom's domestic blind cricket league. In his very first year, he became a prominent member of the team contributing to winning the UK league.

His friends find it difficult to keep pace with his social life that ranges from theatre, music, charity work to Formula F1, tennis and globetrotting to 'watching' cricket matches.

Ashish was born in Mumbai and spent most of his time there.

An avid sportsperson, Ashish received training to become a professional tennis player while in high school.

He began losing his eyesight early because of a condition called retinitis pigmentosa. Instead of giving up hope, Ashish countered this adversity by focusing his energies on academics.

Ashish stood second in his class at Narsee Monjee Institute of Management Studies in Mumbai. He joined ING Vysya bank as a fixed income trader in Bengaluru.

Soon, in pursuit of a career in global financial markets, Ashish came to Wharton in 2006.

Not only did he excel in academics by graduating with honours, Ashish became an inspiration in the campus.

He was known for leadership and extra-curricular activities. Ashish became a staff writer of the Wharton Journal, member of a Brazilian drumming group, and chair of the 'Wharton Leadership Lectures Committee', among other things. At graduation, Ashish was voted by his peers for the Joseph P Wharton Award for Leadership and Innovation.

Ashish is interested in raising awareness about social issues that impact him deeply.

He supports Pratham (working with poor children to provide them education), the Akshay Patra Foundation, which is Asia's largest midday meal programme reaching 1.3 million school children daily, and Enable India, a non-profit organisation that works towards the empowerment of the disabled through job training.