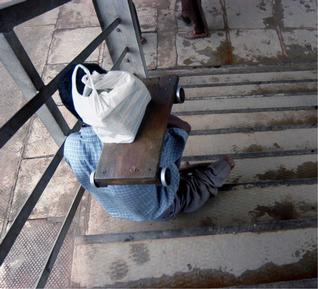 Society mostly sees what ‘disabled' persons can't do, not what they can nor what they will be able to, if only we help them realise their potential and lead a fulfilled life

F or them, the world is beyond reach. The most ordinary of aspirations — to enter school, work in the fields, go out to worship, get married, the prosaic ingredients of even the most humble person's workaday life cycle — are denied to them. Despite profound and consistent denial of their human rights, an estimated 50 million men, women and children with disabilities have remained on the outer periphery of both public policy and social action in India. Hidden away behind the walls of homes and institutions, they are most frequently victims of extreme social prejudice and ostracism, even as they struggle to achieve their potential of a fulfilled, dignified and useful life.

We know almost nothing about the existential experience of persons, and even less about women and girls, who live with disabilities in the countryside. What life is like for them really, how do they cope, what do they suffer, what are their dreams? I recall some years ago being associated with a group of mainly disabled researchers, who sought answers to questions like these in a sample of villages in Rajasthan and Andhra Pradesh.

The result is a sense of isolation, dependency and pervasive low self-esteem, which we encountered widely amongst people with disabilities. They felt humiliated by their sense of dependency for sometimes even the simplest acts of daily living, like bathing, eating, and attending nature's call. On many occasions, we found in impoverished homes, all care-givers had to go out for wage work, and severely disabled people forced to remain without food and care for the entire working day.

There was profound denial of schooling to children with disabilities. We could not locate a single teacher trained in working with children with disabilities, or special teaching aids; there were no ramps in any rural school. For disabled children of impoverished rural parents — agricultural workers and small farmers — the chances of going to school, and remaining within it, are especially low. Where mothers have to do wage work to sustain the family, they cannot take the child to school. Girls are more burdened than boys, because they have to look after the household work, and take care of their younger siblings. We consistently found, ironically, that disability was no barrier only to the conventional domestic duties of house-work of girls and women.

We found that a third or more of people with disability who were in the working age-group had absolutely no opportunity to work and they were fully dependent on the members of their family. These included persons with leprosy, visual impairment, and severe mental and multiple handicaps. Although most of these persons were capable of productive work, their families and the larger community regarded them to be incapable. Those who could find work had low-end employment, uncertain, barely averaging 7 to 10 days a month, with paltry wages. But even this low-wage employment was available only when other workers were not available, or in peak agricultural periods. Even such employment was highest for persons with physical disabilities, whereas other disabled peoples like those hearing impaired were considered unsuitable because of difficulties in communicating work demands.

We found the highest, frequently tragic, levels of vulnerability and social exclusion among rural women with disabilities. Most were forced to marry in highly unequal situations, as second wives to older men, widowers or divorced men. Many reported that they were treated mainly as unpaid domestic labour and sexual objects, and suffered high levels of physical and psychological domestic abuse, sometimes desertion. Girls with disabilities, particularly those who are mentally challenged, were found to suffer from routine sexual abuse and unwanted pregnancies.

Traditionally, the most positive response that society has been able to muster towards the disabled has been pity, reducing them to passive objects of our charity. However, interventions based on a philosophy of charity, however well-meaning, not only rob the disabled of their dignity, self-esteem and self-confidence, but also perpetuate their dependence and obstruct the possibilities of their achieving a life of self-respect and relative self-reliance. They also reinforce further prejudice in society about disability and the disabled.

In all work for the rights of disabled persons, it is important first of all to remember that people with disabilities are full individual human beings just like anyone else with independent personalities, dreams, aspirations, interests, skills and potential. They have the right, as well as the potential, to lead fulfilled, productive and happy lives with dignity and relative self-reliance, just as much as anyone else. The success of our interventions should be judged by the yardstick by which these potentials are actually realised. Further, whereas institutions are important as specialised resource centres, they should not be instruments to confine or segregate the disabled; instead the striving should be for the full social, economic, educational and cultural integration of the disabled in the wider society.

The reason why disabled persons are often denied this potential of achieving a full life of dignity is not related so much to the limitations of their disabilities, as to the way that society views and treats the disabled. We see only what they cannot do, not what they can do and even more importantly what they might be able to do. We offer them only our ignorance, prejudice, revulsion and rejection, and consciously or tacitly place insurmountable economic, social, architectural, educational, legal, transport, cultural, health and other barriers to their achieving a fulfilled life with their full potential. This is why most disabled people experience humiliation, segregation and indignity throughout their lives. Shrouded from our collective view and conscience, they somehow live out their lives, surviving, but only just, most often at the precipice of despair.

It is only when they organise into a social and political collective of voice and assertion that an uncaring state and society will finally be forced to act. There are many examples of hope from across the country that this has begun to happen – that disabled people are themselves ending their long exile from hope.

Shrouded from our collective view and conscience, they somehow live out their lives, surviving, but only just...