Look, I can swim 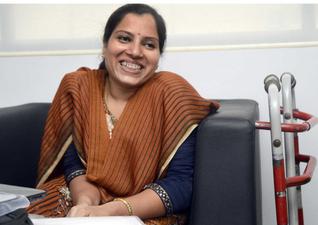 
A conversation with Madhavi Latha is revealing. You don't just get to know about her initiative ‘Yes we too can', but also about this mellow 41-year-old whose answer to all her challenges is a generous smile.


Madhavi was only seven months old when she suffered an attack of poliomyelitis, which left her with 80 per cent disability.But that didn't stop her from acquiring a long list of professional qualifications, driving to work everyday and fighting to beat the odds. She is a Senior Manager at Standard Chartered Scope International.

However, four years ago, she developed complications and the doctors weren't too hopeful. “I had severe back pain and other complications. The doctor told me that if I did not undergo surgery, within a year, my life would be at risk. The chances of the surgery being successful were minimal and I didn't want to risk it. Desperate, I visited a physiotherapist, Ananda Jothi, who changed my life,” she reveals.

Ananda Jothi recommended that she tryhydrotherapy, and for the first time in Madhavi's life, she was engaged in sports. “The benefits I've derived from swimming are astounding. My back pain has disappeared, and I am able to move better. The physiotherapist told me that this therapy has been in the textbooks for ages but isn't extensively used. If I can derive the benefits at my age, you can only imagine how well it would work on younger people,” she says.

That's how ‘Yes we too can' began. “People with disabilities lead a sedentary life. This eventually leads to a lot of health complications. Physical exercise is very important to any person but often parents don't realise it. They're apprehensive about their children involving themselves in sports, unlike the West,” says Madhavi, adding, “when I began swimming, my parents would accompany me everyday, with their hearts in their mouth. Eventually, they realised that I could swim and understood how it helped. I want parents of differently-abled children to know that it's important to engage them in physical activity.”

Her initiative aims at creating awareness about the benefits of disability sports, counselling the physically-challenged and supporting those from the economically weaker sections. As part of the initiative, she has obtained permission from the Shenoy Nagar swimming pool to hold coaching classes. “I've been going around giving talks in schools and colleges. And the response to my initiative has been overwhelming. My company is willing to arrange transportation to the pool and back. We're just waiting for students to enrol.”

A colleague, who is also physically challenged, took a leaf out of Madhavi's book and went along with her for swimming. “He wondered whether he would ever be able to swim. I told him that if I could, so could he. Now he's very happy and confident he can handle himself better. In the West, there's badminton, basketball and every other sport for people like me,” she says.

Madhavi recently participated in the Corporate Olympiad and won the bronze in the 100m swimming category and hopes to be part of the Paralympics soon. “I always thought Madhavi and sports were two different worlds. I wondered if they would ever meet but swimming has helped me realise that dream. I recently participated and won the Corporate Olympiad and people began to refer to me as a sportsperson. It feels wonderful,” she smiles.

But Madhavi's dream is to start a sports school for persons with disabilities. “While I'd like to start a school, my immediate goal is to spread my message across the country. I would like to do everything possible to make sure that other people with disabilities don't go through what I did. Sometimes, we tend to feel excluded from society. With a little bit of support from people, I'm sure we can get over anything.”

To register for classes or to contact Madhavi, visit her blog http://yeswetoocan.

blogspot.com or email her at madavi.prathi@gmail.com