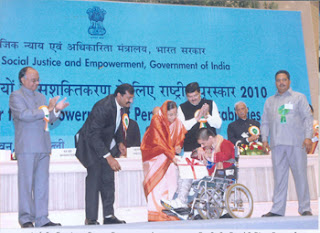 Henry David Thoreau once said, “Men are born to succeed, not fail.” And with display of courage, strength, patience, and controlled aggression, an individual can create wonders by emerging victorious against all odds. One such example of human valor is Pune-based 33-year old Kedar Indurkar. Lack of education, facilities and necessary support for children with cerebral palsy did not prove to be a hindrance for Kedar, who bagged the National Award for the Empowerment of Persons with Disabilities. He was felicitated by the Union Ministry of Social Justice and Empowerment with the additional national award in the self employed-cerebral palsy category in Delhi on the World Disability Day on December 3.

Kedar has typed and translated twelve books in three languages into Braille. His works are proving extremely beneficial and are adding to the knowledge and education of the visually impaired in institutes in Karnataka and Maharashtra. The translated works include eight books of a noted writer and social worker, Sudha Murthy, and few other books in Hindi and Marathi.

Kedar won this award for translating his interests in computers into an avenue for earning with his hard work and determination. Kedar’s journey with computers began when his father Vasant Indurkar, a chartered accountant, and mother, Dr Suhasini Indurkar, a pathology professor, introduced him to the computers when he was a child. “He was always very good in languages and we decided to concentrate on improving his mental and thinking capacities. He has passed the 10th std exam quite satisfactorily,” said his father.

Kedar, pretty early in life, got hitched to the computers and after learning typing, he typed out his mother’s pathology notes. For typing he uses only three fingers of his right hand.

“I was reading Sudha Murthy’s – Infosys founder Narayana Murthy’s wife – book ‘Wise and otherwise’ and thought that Kedar could translate it into Braille. So we decided to contact her, and after hearing our idea, she readily agreed,” said Suhasini Indurkar.

This was way back in the year 2006 and since then using different software, Kedar has translated into English Braille, eight of Murthy’s books and he also went ahead to learn Devnagari script to translate two Hindi and Marathi books, respectively into Braille as well.

“I don’t usually like reading for I tend to forget what I read, but I do like working on the computer a lot,” said Kedar. The translated books have been given to various blind schools in Pune.

“We are extremely proud of Kedar. He has tried his level best to learn what was taught to him and the exposure he got did help him a lot. Still, commuting is one of the major problems he faces in this country. The disabled are not integrated into the mainstream here and the attitude of people is also a bit prejudiced. Furthermore, there are no ramps in our buildings and buses or care provided for them unlike what we experienced during a visit to the United States,” said Vasant Indurkar.


Kedar has made friends all across the globe through social networking sites. When he is not working on the computer he is busy watching cricket or a movie. He loves non-vegetarian food and he was very impressed with the facilities available for the handicapped in the US, which he experienced during his family tour and wishes that it happens in India too. His favorite cricket player is Rahul Dravid, whom he has met in person.
facebook link