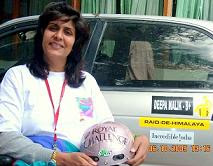 Deepa Malik is no stranger in the field of disability sports. A paraplegic with a strong resolve, she has won numerous accolades for her participation in various adventure sports. Whether it is swimming against the strong Yamuna current, or riding a special bike or even taking a shot at the Paralympics, she has done it all! Last October, she became the first paraplegic to participate in the toughest car rally, the ‘Raid-de-Himalaya’. In a tell-it-all with D.N.I.S., Malik shares her experience with disability and what it took to take the long and arduous Himalayan road.


I was not born with a disability. After 30 years of regular life, I became a wheelchair user due to three spinal surgeries for repeated tumors resulting into spinal cord damage and paraplegia. I could easily compare the two worlds, that of able bodied people and that of the physically challenged. I had the maturity to feel that a lot could be done in the field of disability in our country, starting from social outlook, acceptance of disabled, to their inclusion into the mainstream. I noticed that wheelchair users mostly remained at home. I felt a need to generate motivation among them, so that they live a more wholesome life. This inspired me, and I set out on a mission called ‘ability beyond disability’ in my own little way. I had no clue what I had to do. But I felt that I had to contribute in some way or the other. Promoting outdoor sports I felt was the best possible way. And then to my horror, I found out, that I was the first paraplegic woman to join the world of sports in the Indian scenario!

Driving was another of my passion. So much so, that I often laugh that God probably misinterpreted my desire of ‘being on wheels’ and therefore made me sit on a wheelchair! I had always wanted to rally but somehow, I was made to believe that my this desire would never be fulfilled in the present life because of my disability. That only strengthened my resolve and I decided that I must take part in the world’s highest and toughest car rally ‘Raid-de-Himalaya’.

Everyone thought I had lost it. With a spine that had been cut open thrice and a bladder and bowel condition, how was I going to manage a long, strenuous, high altitude journey, in minus temperatures? The only person who stood by me was my husband. He let me follow my dream, and told me that I would have to get there on my own effort.

I started my homework. Being an army wife, my first try was with the army adventure cell. But I soon learnt that only serving army officers’ wives were allowed to participate. I kept struggling for three years until I landed at the flag off of the Desert Storm Rally in Delhi in February 2009.

I literally sat there trying to pick up contacts and telling various teams about my wish of doing a rally. Some thought I was crazy, some felt happy about my courage but it was the Pune Millennium Team that took me seriously and taught me all the skills of navigation. Through them, I learnt what were the legalities required to be on a rally and that was going to be a challenge.

I got in touch with Himalayan Motorsports Association (H.M.A.) and Federation of Motor Sports Clubs of India (F.M.S.C.I.) regarding my acceptance in the rally as a formal competitor. They needed a bit of time, as it was the first time a disabled person had approached them. But I was happy that they appreciated my love and enthusiasm for motor sports and felt positive. I just held my breath back till I saw a ray of hope when they agreed but I had to complete all the required paperwork.

The most difficult task was to get the personal accident insurance on heavy risk basis. Next up was to start looking for sponsorship and a professional to accompany me and form a team. I am extremely grateful to Maruti Suzuki and three time Raid-de-Himalaya winner, Rakesh Diwan for supporting my endeavour. My husband, too, joined me as an attendant.

After a long struggle for permissions, sponsorships, a rally vehicle, a professional team partner and procurement of snow clothing, I found myself in Shimla. Initially people thought I was there to cheer a friend but the moment I got my name stickers on the car and a competitor’s license and an identity card on my neck, everyone took me seriously. I was very happy to see the surprised look on everyone’s face! It was a moment of achievement, a sense of satisfaction to be able to turn a dream into a reality and to prove to the world that disability is a state of mind and not of the body.

We were flagged off on the morning of October 7. It was a harsh 8 day, 1700 k.m. drive in minus degree temperatures. Even on an altitude of 18000 feet with oxygen shortage, I was able to sustain it all. It was tiring but the adrenaline rush was so high that I never felt tired. During the rally, we were in third position in the adventure category until an unfortunate accident happened.

The car ahead of us braked suddenly and our car skidded and hit the snowy road. The radiator developed a crack and the rest of the journey was completed filling up water every few k.m.s. That made our journey even more challenging and longer in terms of time. But on the whole, the experience was amazing. And I was awarded the TRUE GRIT TROPHY for outstanding courage.

More than the trophy, what made me happy was the declaration by H.M.A. official, Manjeev Bhalla that henceforth disabled persons will also be eligible to compete in the rally. I was thrilled that my efforts opened doors for people with disabilities to the world of motor sports.

Sometimes we take it for granted that a particular thing or activity is not meant for disabled people. Society then reinforces that belief. It happened to me as well when I decided to go for motor biking. But once I was determined, I did not only get a special bike designed but also made it on record time.

I feel that it is important for one to think beyond the stereotype and follow your heart.