Guzaarish-It's made for the gratification of the senses 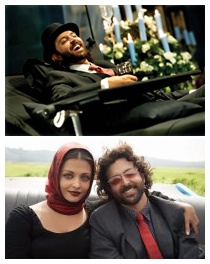 They called him Merlin and anointed him the best magician. But Ethan Mascarenhas (Hrithik Roshan) has very little magic left in his life after a near-fatal accident that leaves him paralysed and confined to bed for life. Can the life-loving Ethan live out the rest of his life as a quadriplegic or has he a right to end the pain and opt for euthanasia (mercy killing)? While his best friend and lawyer Devyani (Shernaz Patel) is ready to fight his case, his devoted nurse Sophie (Aishwarya Rai) can't foresee a life without her beloved patient and is in a dilemma. Will she let go?

Guzaarish is an unusual film in many respects. Guzaarish may be dark and tragic but the magic of the movie is that it makes you smile in the end Trying to discuss the journey of Guzaarish is like attempting to describe the beauty of nature. Imposssible. Guzaarish is completely original. I've seen the Spanish movie and the only commonality between the two is that they're both based on a quadriplegic person. The script of Guzaarish is nothing like anything I'd seen before, which is what propelled me to say yes to Bhansali. Firstly, because it follows a film craft that is akin to pure art. Film maker, Sanjay Leela Bhansali and his cinematographer (Sudeep Chatterjee) have created a collage of riveting paintings on screen, where both the interiors of a crumbling mansion and the outsides of an incandescent Goa landscape literally transport you to an art gallery. The exquisite detailing of Aishwarya's daily chores as she brushes her patient's teeth, shampoos his hair, scratches his nose, cleans his bed sores or simply draws the blinds to keep the sunlight out is mesmerising to watch, even as their rare outdoor soirees blind you with their exuberance. Catch Hrithik and Aishwarya enjoying a drive down the uninhibited Goan countryside and you can actually feel the breeze rustle through your hair.... But more unusual is the spirit of the film which supposedly articulates a plea for death but ends up serenading life and love with tenderness and restraint. Ethan may be plagued by his immobility and languishing body, but his eyes dance like a dervish. Despite his desire to die with dignity, there is a liveliness that surrounds him as he interacts with the few people around him: his student, the wanabe magician Omar (Aditya Roy Kapur), his lawyer friend, Devyani (Shernaz Patel), his die hard doctor (Suhel Seth), his mother (Nafisa Ali) and most importantly, his nurse, Sophie (Aishwarya Rai). Even the few flashbacks that the film features showcase him as an ardent lover and an adorable kid, who performs his first magic trick before his mother. Yes, death does hang around like a shroud, but life bristles and bursts through every frame of Guzaarish.

Then again, the film is one of the most unusual love stories of recent times. The relationship between Ethan and Sophie is much more than a patient-nurse bond and brims over with a passion that threatens to burst any moment. So what if almost everything is left unsaid between the two. The eyes -- and expressions -- say it all. Kudos to Hrithik and Aishwarya to create some of the most romantic moments on screen without resorting to cliche and stereotype.

But in the end, it is Hrithik Roshan and Aishwarya Rai who leave an indelible impression with their interpretation of two extremely difficult and unconventional characters who do not have the usual props to express grief, joy, pain and passion. If Hrithik uses his eyes as his be-all and end-all, then Aishwarya is a stunning picture of fire and grace, walking away with certain scenes by her sheer vitality. Catch her outburst in the courtroom and her impromptu jig in the restaurant to understand how underutilised she has been in run-of-the-mill cinema. Equally noteworthy is the music score where Sanjay Leela Bhansali debuts as a music director.

A film like Guzaarish isn't made for the box office. It's made for the gratification of the senses. And that it does, in ample measure